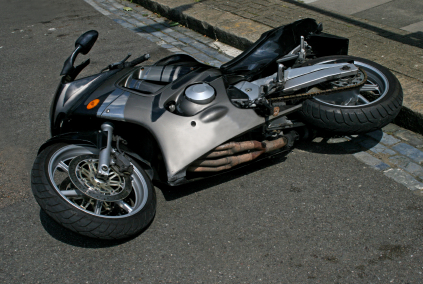 Upstate NY, including Syracuse, has a short motorcycle season. The Syracuse motorcycle accident lawyers and Michaels Bersani Kalabanka know how important it is to bikers to cram in the most motorcycle fun in a short season. Yes, motorcycles are fun, but they also present greater risks than other motor vehicles for several reasons: (1) a motorcyclist is exposed to direct impact between his body and the pavement or other vehicles; (2) two wheels are less stable than four; (3) cars and trucks are much bigger and heavier than motorcycles and thus, in an impact between them, the motorcyclist takes the biggest impact; and (4) other drivers just don't notice, see or observe motorcycles. Because of this last fact, drivers often cut motorcycles off, or fail to yield to motorcycles, or follow motorcycles too closely, or open their car doors into motorcycles, or rear-end motorcycles. Even a slight impact can knock the biker from his motorcycle and cause serious injury.

Roadway conditions in upstate New York, especially in the spring, make motorcycles more prone to accidents caused by poor roadway maintenance or construction. For example, a poorly drained road might cause a car to have to wade through a deep, long puddle, but that same puddle might cause a biker to be thrown from his bike. Thus, poor drainage, clogged culverts, potholes, steep shoulders and other roadway defects are much more dangerous to motorcyclists than to other vehicle drivers and occupants. A biker injured by a road defect can bring a claim against the city, town, county or even the State that owned and maintained the roadway.

Another cause of motorcycle accidents is poor design or manufacture of the bike itself. Some bikes might have a throttle that sticks, or faulty brakes, or defective forks, defective fuel lines, defective welded parts, defective bolts, defective tires, or other defective parts that can cause an accident.

Our Syracuse motorcycle accident lawyers also know the different rules regarding motorcycle insurance. Yes, insurance and liability rules are different for motorcycles than for cars. For example, most motorcyclists do not have "no-fault" insurance (which is required only for cars, but not for bikes). Another example: When you are hurt in a car accident, you generally cannot sue the negligent, at-fault driver unless you have suffered a "serious injury" as defined by law. But if you are injured on a motorcycle, you can bring a claim against the at-fault driver even for minor injuries.

New York Motorcyclists are ill-informed about the insurance they should have. Most are underinsured. Besides representing bikers after a crash, Michaels Bersani Kalabanka takes a proactive stance. Our motorcycle accident attorneys help educate Syracuse area bikers and clients on what motorcycle insurance they need.

The biggest single danger facing motorcyclists can be summed up in one word: Motorists. Drivers of four-wheel vehicles such as cars and trucks just don’t “see” motorcycles. They don’t see them because they are on the lookout for other cars and trucks, not smaller vehicles like motorcycles and bicycles. That’s why we at Michaels Bersani Kalabanka always tell our biker friends that they should assume they are invisible.

But the fact that many motorists overlook motorcycles does not let them off the hook if they hit the motorcyclist. To the contrary, New York law requires motorists to not only look out for motorcycles and others in the roadway, but to actually see them. Drivers are required to see what is there to be seen, and an excuse such as, “I looked both ways but just did not see him” will not do.

Picking a jury in a motorcycle case must be done with great skill and care? Why? Because so many people harbor prejudices against motorcyclists. They think, “it’s his own fault he got injured so badly because he chose to ride a motorcycle, and everyone knows how dangerous those are”. But that is not an acceptable way of thinking, at least not on a New York State jury. Under New York law, a jury cannot blame a motorcyclist for his injuries merely because he chose to ride a motorcycle. Under our law, a biker has an absolute right to be on the roadway on his or her bike, and has a right to expect other motorists to respect his or right of way and to look and see him or her. This must be carefully explained to jurors, and jurors who harbor such prejudices must be removed from the jury.

The Syracuse motorcycle accident lawyers of Michaels Bersani Kalabanka have recovered millions of dollars for clients injured in motorcycle collisions and for other injuries to cover their medical bills, lost earnings, pain and suffering, and more. If you or a loved one has been a victim of a motorcycle accident, contact us for a free consultation with an experienced lawyer who can inform you of your legal rights and maximize your compensation.

Contact Us
Practice Areas
FAQs About Motor Vehicle Accidents
Central New York Injury Lawyer Blog - Motorcycle Accidents
Client Reviews
★★★★★
He is one of the top lawyers in central New York & has the accolades to show for this, but in my book he's the top lawyer in the country. I am honored to have had the opportunity to work with Mr. Bersani & to have had him on my team! Matthew
★★★★★
I admire the amount of background work he did which was instrumental in getting me a very good settlement. Also, having never been involved in a personal injury lawsuit, Michael was very patient explaining the legal issues. You're in good hands with Michael Bersani and the firm of Michaels Bersani Kalabanka. Richard
★★★★★
Dave took over my wrongful death case after it was badly messed up by another lawyer. He was dogged in his pursuit of all the information needed to make a solid case, and he succeeded in bringing it to a very satisfactory settlement. He was honest and straightforward, kind and compassionate through meetings, depositions, court appearances. I highly recommend him. Christine
★★★★★
Dave has handled our legal matters for over 20 years. Always there when we needed him. We were so happy with his professionalism and results that we referred him to several friends. If we ever need this type of service again, Dave will be the first and only call we make. Jackie
View More
Submit a Law Firm Client Review