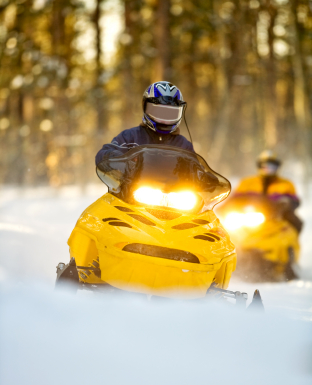 Our Syracuse snowmobile accident lawyers have learned, from experience representing injured sledders, that Unsafe speed and alcohol, or often a combination of the two, cause of the majority of snowmobile accidents, at least in the Syracuse area where we work. When snowmobiles crash, it is usually with fixed objects, such as trees, after the snowmobiler loses control of his sled and leaves the trail. Crashes with other snowmobiles, cars or trucks, however, are not uncommon.

A New York snowmobiler needs to become familiar with New York State laws regulating snowmobiling. Our snowmobile accident lawyers serving Syracuse area accident victims are very familiar with them. For example, snowmobilers in New York need to register their snowmobile with the Department of Motor Vehicles if they are going to use it on any property other than their own. Snowmobiles also need to be covered by liability insurance. If you are on a snowmobile, you are required to wear a helmet. Local laws might contain additional rules on snowmobiling.

The state of New York does not require snowmobilers to have a driver's license. Those 18 or older can ride a snowmobile without any license or training, though a safety course is recommended. Children from ages 10 to 18 can ride a snowmobile without supervision if they have a certificate of competition of a safety-training course approved by New York State, or without this training course, they can ride only on land owned by their parents or under the supervision of an adult or over or someone between 10 and 18 who has the safety certificate.

Some of the most important snowmobile safety tips are:

Snowmobile accidents can cause serious injuries, including brain injuries, spinal cord injuries, paralysis and even death. Traumatic brain injuries (TBI) are especially common, which is why helmets are so important - they drastically reduce the risk of TBI's.

The Syracuse snowmobile accident attorneys of Michaels Bersani Kalabanka have recovered millions of dollars for clients injured in snowmobile accidents and for other injuries to cover their medical bills, lost earnings, pain and suffering, and more. If you or a loved one has been a victim of a snowmobile accident, CONTACT US for a free consultation with an experienced lawyer who can inform you of your legal rights and maximize your compensation.